Going to the Chapel

Details are always the place where things get complicated.  Many of us might prefer to be like Scarlett O'Hara and say "I'll think about that tomorrow", but tomorrow always come quicker than you imagine and you find you must look at those dreaded details.

It didn't take long for Jeremy and I to decide that we would get married and raise our child.  We'd gone over the possibility of adoption but that didn't seem a viable option.  It's amazing how quickly you become attached to the life growing in your womb once you know it is there. It's almost like someone designed it that way.......

So, one March evening, Jeremy bent down on one knee in my ultra-romantic studio apartment and asked me to share his life with him, to be his wife and I, without the slightest hesitation, said "YES"!!!

With that decided, we proceeded with how to let our parents know what was happening. For my part, I didn't find myself self tremendously nervous to tell my dad.  I'd watched him live a life that was decidedly outside the lines (rules for Christian living) and I knew that my own mother had been pregnant with me when they'd been wed. So one day, the two of us went out to his home and shared the news.  His response was as expected, pretty calm and not particularly emoting one way or the other.

Sharing with Jeremy's parents proved to be considerably more difficult for Jeremy. Bob and Dorothy were and are committed followers of Christ.  They had taught Jeremy the need for abstinence before marriage.  Jeremy, as a first-born son is also a dedicated pleaser and he was crushed at the idea of disappointing his parents with news of his indiscretions. It took him some time to finally come to a marginal measure of peace with the idea of posting a letter in the mail to break the news.

If you know Jeremy, you know that even composing such a letter was going to take a great deal of time and effort, but eventually, he completed it and mailed it. If he'd have been a nail-biter, his nails would have been nibbled to the quick during the interim.

And Bob and Dorothy, just as they had when they received me with love, received this news with love and acceptance. Rather than point fingers, they reminded us that we are all prone to stumble and they at least were looking forward to meeting the little darling I was growing in my tummy.

It was decided that we'd marry on Jeremy's grandparents 56th wedding anniversary in Bob and Dorothy's Flagstaff church home.  May 16th was not much more than 6 weeks away by the time all of this had been settled and there was much to be done.

Dorothy had an amazing group of friends who threw themselves wholeheartedly into planning our wedding day, even including a bridal shower for a young woman they'd never met.  All I had to do was approve of color choices, baseline ideas and find myself a wedding gown.

It is a little to strange to think now how few people attended for me.  At that time in my life, I had very few friends and the only family that came was my dad.  In fact, only one friend outside of my two bridesmaids came to my wedding and to this day, I can't imagine why she did.  She was a lovely young woman I worked with and she brought her brother.  I can't recall that we ever did a single thing together outside of work, but her support at our wedding showed me that sometimes you never know who truly cares.  That kind of gesture can sometimes mean everything. 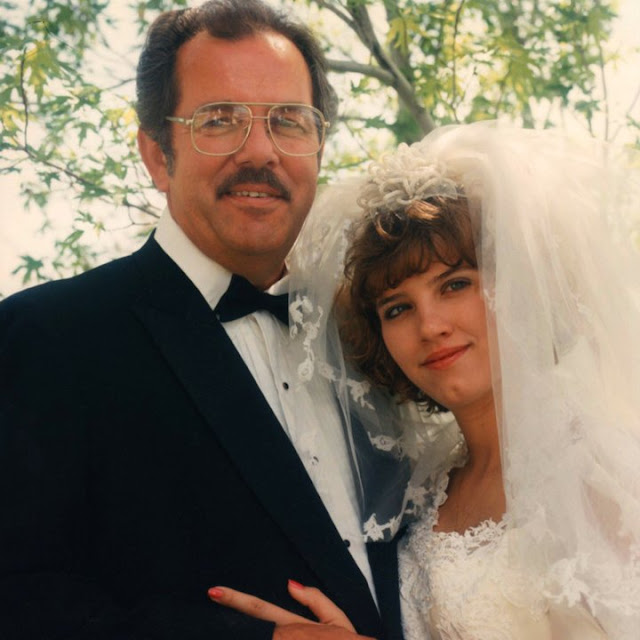 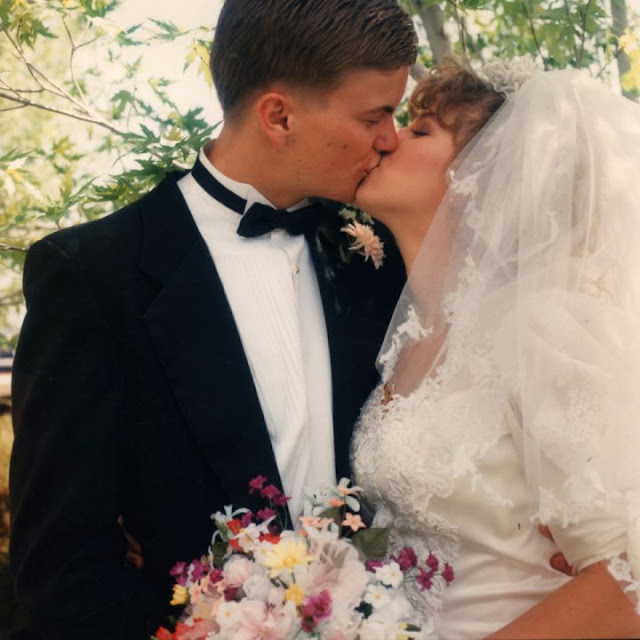 Jeremy's family and friends filled out our gathering and before we knew it, we were bound together under the sight of God and man. Our wedding was simple but lovely.  We held our reception in the beautiful back yard of a family friend and everyone brought potluck to share.  We danced, laughed, opened presents (they still did that AT the wedding back then!) and enjoyed one another.  And then, Jeremy and I hopped in our little chariot (a 1973 Toyota Celica) and headed to Lake Powell for a camping and boating honeymoon.
Posted by Ursula Schneider at 7:00 AM

Email ThisBlogThis!Share to TwitterShare to FacebookShare to Pinterest
Labels: My Story

I really enjoy your feedback, so thanks a bundle for taking the time to leave it.

Ursula Schneider
I am a follower of Jesus, a wife, a mother, a friend. I hope to be changed from glory to glory to look more like my Savior. I am fascinated by the way people relate to one another. I am always looking to learn about what makes people who they are, especially as it relates to their past experience. I am a follower of God's beauty, and God's light and God's truth. I want to be all Jehovah has created me to be, and yet I fall short every single day. Even still, I know I am accepted as a child of the King and am a work in progress. A bit of Art if you will. I want to be able to express myself in a way that helps people to connect, both with me and with God. I want to be a bridge that leads to relationship. I believe life is found in relationship.