Most new brides have a certain expectation for what marriage will be like.  If they tell you otherwise, they aren't being honest. It's not really something that can be helped. If you literally had zero idea what to expect when entering into a legally binding agreement of matrimony, what would entice you to go in the first place?

So, like any other bride, I walked happily into marriage anticipating a certain type of bliss that at least marginally lined up with, you know, just every fairy tale I'd come across over the years.

And, like any other bride, I quickly discovered I'd made a significant miscalculation. It's not that marriage was terrible right off.  It's just that it didn't look anything like a fairy tale and that takes a girl off guard.

Let me start by saying that I am fully convinced that I have the most amazing husband on the planet.  I will tell anyone the same story if they ask me.  He's been an absolute blessing to me in so many ways that I couldn't possibly express all of them. He's the most loyal, committed man I've ever met.  He's also the most meticulous and, personally, I'm pretty sure he can literally do anything he sets his mind to.  He's kind, compassionate, a great listener, intelligent, hilarious and wise.  He's the best, truly he is and if I ever have to find another husband because he has died, it will be pretty much impossible to find one who will hold a candle to this man. I'm almost certain that I wouldn't want to even try.

With that said, he did have a wee bit of growing to do after we got married.  Ok, a LOT of growing.  But so did I. And so began the process of discovering in exactly what areas we needed to make adjustments.

The first thing that presented us with a difference of opinion was how money ought to be spent. For example, I had in mind that we'd be spending money on new things for our baby.  Jeremy, on the other hand, anticipated yard sales and hand-me-downs. I anticipated that we'd go out for dinners on a somewhat regular basis.  Jeremy, on the other hand, liked home cooking quite well and didn't much fancy offering his hard-earned cash to the local prepared-food vendors.

Well, you probably get the picture.  It took a lot of effort, and would for years to come, to agree as to how to make purchases.  To be honest, there's still work to be done in that area, mostly on my part.

You may have heard that money is the number one reason for divorce. By God's grace, though we certainly didn't agree about how to spend it, we did agree that we didn't want to let it divide us and in the end, that issue, though difficult, has not been successful in bringing an end to our union.

We were also still adjusting to the idea of being parents. The truth was that we weren't prepared with the attitude of a healthy couple expecting a child.  We'd thrown ourselves headfirst into the jungle of parenting and we lacked the basic necessities to prepare well. The primary problem, the one I see existing in most young parents, was SELFISHNESS. 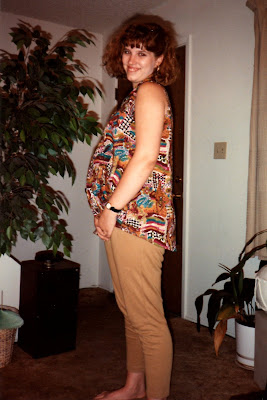 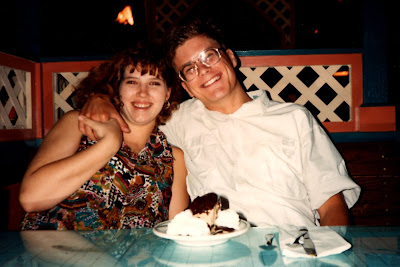 (I turned 20 the first year of our marriage and we celebrated at Carlos Murphy's restaurant.)

A grown person can have an extraordinary tantrum when faced with even the mere idea of having to give up a bit of self when they hadn't previously decided on doing so. Given that we were expecting a baby, a few such selfLESS ideas presented themselves and let's just say the the walls in our apartment did require a bit of patching before we moved out due to the aforementioned tantrums.

But there were wonderful parts of being married too.  Right from the start, I knew that I'd married a good man. We worked together to earn money for our family, pooling our resources.  In the year we married, we also spent a lot of time learning about the politics of our country and choosing which side we were on.  We formed many of those ideas together. 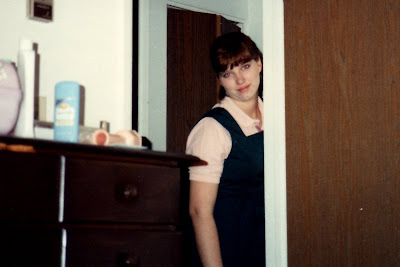 (Just another day to go to work)

Jeremy attended school at the U of A and worked as a server at Coco's restaurant. I was working as close to full time as a server as well, so we didn't have very much free time together as a couple. Our car and motorcycle always seemed to need something and Jeremy and his dad were prepping a demolition derby car for the Labor Day derby event. All of that meant that we really enjoyed what little time we could scrounge together. 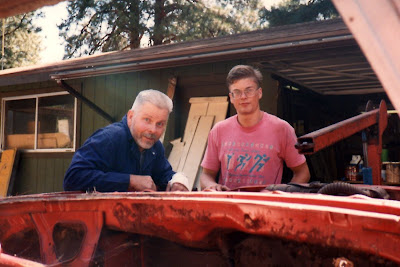 (Jeremy and Dad work on the Derby car in Flagstaff) 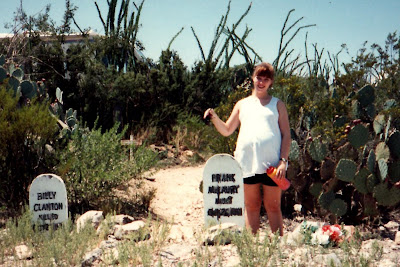 (A trip to Tombstone added interest to our summer)

God blessed us right from the start with a sweet couple a few doors down who were also expecting a baby.  It was great to be able to talk with Sabrina about pregnancy and parenting.  She already had 3 older children, all under the age of four.  She and her husband Aaron were followers of Christ and that seemed to be their primary focus in life. That being said, we never felt judged and were able to develop a casual friendship as we watched their family romp in the grass of our common area. 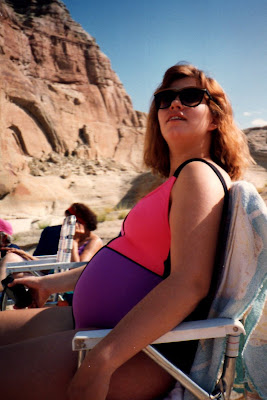 (We took a couple of trips to Lake Powell and enjoyed fun in the sun, I even tried to learn to water-ski while 7 months pregnant!)

The Summer passed relatively uneventfully and Fall was now upon us.  Fall, and new life!
Posted by Ursula Schneider at 7:00 AM

Email ThisBlogThis!Share to TwitterShare to FacebookShare to Pinterest
Labels: My Story

I really enjoy your feedback, so thanks a bundle for taking the time to leave it.

Ursula Schneider
I am a follower of Jesus, a wife, a mother, a friend. I hope to be changed from glory to glory to look more like my Savior. I am fascinated by the way people relate to one another. I am always looking to learn about what makes people who they are, especially as it relates to their past experience. I am a follower of God's beauty, and God's light and God's truth. I want to be all Jehovah has created me to be, and yet I fall short every single day. Even still, I know I am accepted as a child of the King and am a work in progress. A bit of Art if you will. I want to be able to express myself in a way that helps people to connect, both with me and with God. I want to be a bridge that leads to relationship. I believe life is found in relationship.